Here it is Thanksgiving again in America, a time of feasting, football and family.

We just returned from a fabulous tour of Israel, where we were immersed in the history and culture for two weeks. When we left, the lighted menorahs had gone up all along the streets of Jerusalem and our Jewish guide was looking forward to celebrating Hanukkah with doughnuts, blintzes and latkes.

Most people I know in the U.S. don’t think too much about affording food, except perhaps to fuss about the ever-rising cost of meat or the value of organic produce. A turkey is practically free at the supermarket, if you buy a bill of groceries to go with it. Beans, sweet potatoes and pasta are downright cheap. 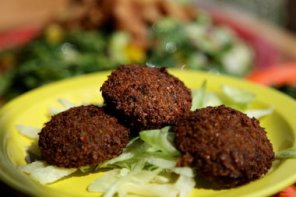 Falafel is a popular fast food

Food was expensive in Israel. We were shocked when our guide took us for falafel (fried chickpea) sandwiches and our bill was over $25. A simple fish dinner cost $20 per plate and the lavish hotel buffet was $60 per person.

At first we thought it was just because we were in tourist-y places our guide had chosen, but when left to our own devices we didn’t do any better, paying over $14 for a serving of French fries and a small bowl of tabbouleh salad.

Israel is a prolific producer of food, even though fields have to be irrigated. Everywhere we traveled, we saw fruit orchards, banana plantations, citrus and nut trees. When we converted liters to gallons and shekels to dollars, we realized gasoline is about $8 a gallon there and that may be a large part of the cost of food.

When we arrived home, the first thing we did was buy a cheap hamburger. Two burgers, fries and two drinks cost less than $10.

This Thanksgiving, we are especially giving thanks for America’s affordable feast.