Our beautiful deck needed some repair.

My husband is brilliant! He can fix stuff I can’t fathom. He knows how to install a hot water tank and stop a leaky toilet and unstop a drain. He can rewire electrical things and test batteries. He generally knows what is wrong with the car and the computer. He kills crawly bugs with ferocity and with no fear he climbs up on the roof to trim tree limbs. What a blessed woman I am to have married such a capable man!

It took me a few months to figure out Daniel is not a carpenter. He has some saws and a hammer and he can replace a board. But he has no idea how to build anything out of lumber.

At our old house was this wobbly shelf over the washer and dryer. It was held up by metal brackets that moved back and forth. They were too close to the ends of the boards and from time to time the whole thing would fall down and dump laundry supplies in the floor. I was amazed that my brilliant husband never endeavored to fix it or replace it with a proper cabinet. I propped it up the best I could when we moved out because by that time Dan had admitted he built the silly thing.

It didn’t matter because I was, and am, head over heels in love with the man.

I remember when I first introduced this sweet new romantic interest to my church. One of the ladies remarked about how very handsome he was.

“Do you think?” was my response.

I gave her some reasons I was attracted. “He’s extraordinarily considerate; he’s a gentleman; he loves the Lord; we have a lot of life experiences in common.”

Later, as I fell in love and found even more to appreciate about Daniel, he became incredibly handsome. I remembered and chuckled about the time when it was not so.

Now our new home needs some repair of the wood beams above the deck. The structure is over thirty years old and still standing because it was built out of Western Red Cedar. Dan has been out there this week removing deteriorated pieces and replacing them with treated White Pine. It was cheaper.

Having grown up with a dad and brothers who knew how to build things and having lived 26 years with an architect, I advised and suggested. Then I sort of tried not to watch.

I see the new deck application isn’t quite as architecturally stylish as the old deck trim. Six inch boards have been substituted for eight inch ones; smooth-sawn for rough-sawn; the planed lumber isn’t quite as thick. I try not to notice but I can’t seem to help myself. I also know it’s going to be at least three months before it can be painted. 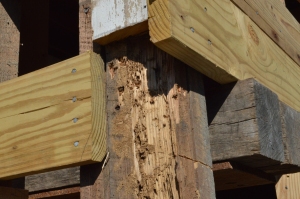 I refrain from saying much because I know my husband is brilliant about all sorts of things. Shall I fault him because he was never trained in carpentry?

I choose to look at my brilliant husband through eyes distorted by love. I think his work is wonderful, even when flawed. In my eyes, our new deck improvements are simply beautiful!