The last time I drove my cute little sports car, it left ominous drips on the garage floor. Since the coolant has had a slow leak that our mechanic can’t find, I thought perhaps it was getting worse and I asked Dan to take a look at it.

When my husband tried to move the car to work on it, he discovered the brakes were completely out!

I was sure the drips weren’t brake fluid but, whatever the cause, the car was not drivable. I was ever so grateful the brakes had worked fine on my last outing.

We then pondered how to safely get the car to the mechanic sixteen busy road miles away. Dan decided to check the brake fluid.

After much frustrating removal of several seemingly unnecessary covers, he found a vacuum hose off. When he slipped it in place, the brakes worked fine.

Off to the parts house to get a replacement hose and clamp, my mechanically minded husband was sure he could save us a tow charge and mechanic’s bill.

He brought home the parts and set up a fan in the garage. Because everything in the little Audi TT is crammed together and tightly engineered to fit in a miniature space, this was going to be a sweaty endeavor.

My sweetheart got the old hose off and the new hose on but tightening the bolt on the clamp was proving difficult. He dropped the ratchet. Instead of falling to the floor, it landed on the Audi’s protective bottom plate.

Wow! I had no idea my engine was so well protected from the elements. I was assigned a flashlight.

Dan got tools for retrieving dropped screws. They were long enough to reach the ratchet but not sturdy enough to hold it. My brain went to the things I know and I tried the mop handle, which lifted the ratchet but couldn’t pick it up. Then I fetched the barbecue tongs.

The tongs weren’t long enough but I thought maybe I could squeeze my forearm between the car’s frame and the radiator cowling. I did. The tongs captured the tool, lifted it and…my arm was stuck.

I felt like the monkey who has reached into a jar for a peanut. I stubbornly kept my grip on the tongs, used my left hand to bend the radiator guard ever so slightly and pulled my squished arm out a half inch at a time—scrape, bend, scrape, bend—for the critical fattest four inches. The ratchet fell out of the tongs but my arm was saved.

We both stared dismally at the elusive ratchet. We couldn’t be driving around with that thing under the engine. It might damage something. It might rattle.

Dan picked up the mop. “Think of something really, really sticky,” he said.

“Mousetraps!” I said and ran to the utility room to fetch a sticky glue board we use to trap bugs. Before we learned to put these incredibly sticky things safely under furniture and appliances, we both experienced being stuck to them. They are unbelievably strong and will almost pull the sole off your shoe.

Dan cut a piece of mousetrap board, taped it to the end of the mop and it worked perfectly to lift the heavy ratchet out of the engine compartment.

We are adding glue boards to our list of mechanical necessities, along with duct tape and baling wire. 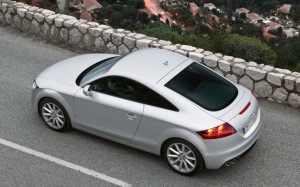 My car is safely zipping around town again. My arm is bruised but recovering nicely. I suspect the Audi may be indignant at having her innards probed by a mousetrap on the end of a mop handle. She’ll get over it. I’m proud of our ingenuity and have dubbed us The Mousetrap Mechanics. We’re quite a team!