I love words. I’ve had more than a few conversations about my favorite ones and why I like them so much. My tendency is to favor words that are less common or that have some memory attached. I’m a real fan of olde English.

I get frustrated with people who use the same simple words again and again. A certain political figure comes to mind. His tweets and speeches are full of the word “very.” But I am absolutely repulsed when people resort to crassness when they run out of creative words. I would much rather hear VERY than “effing.”

A word doesn’t have to be full of letters to be a big, strong word. Look at the word APT. It has only three letters but seems to pack a lot more punch than ABLE or LIKELY.

CAULIFLOWER is a long word but has a simple, straightforward meaning. Well, okay, it has been used to describe a boxer’s ear. Still, it’s a gnarly vegetable. I consider this a small word.

FUNK is a word I like. It’s short but conveys a good deal of emotion, telling the reader about a blue mood without implying a serious or permanent mental state. I look at it as a strong word.

The problem with big, strong words is that we don’t hear them as often as we do the little, weak ones. The more we hear a word, the more likely we are to use it in our writing or speech. It gets tiresome.

Just think how many times a week you hear the phrase, “Oh, my God.” It is totally worn out. The word PERFECT, used in previous centuries to denote maturity, and something to strive for, has lost its effect in today’s generation, since even a properly filled form is “perfect.”

It seems the current trend among young people, rather than learning the language, is to make things up. MANSPLAIN is one example, though I can’t deny its usefulness. TOMOZ is a new word I think we could have done without. The Oxford English Dictionary has added 2,000 new words in 2018 and the year is not over!

UBIQUITOUS—now there’s a word for you! When I first learned the meaning, it was if I had never heard it before. But once I acknowledged it and started plugging it into my vocabulary, it seemed to pop up everywhere. (Pun intentional.)

After I rode a two-wheeled contraption called a SEGWAY in 2010, I began hearing political pundits using the word to mean a bridge between subjects and I had to look it up. (I love my big dictionary!) 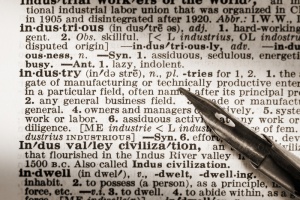 I love my big dictionary!

Years ago I read a Western novel by a (new to me) author that had the word SIBILANCE in it. I skimmed over it the first time. The second time, I had to find it in the dictionary because it didn’t quite fit the definition I had put together from the first use. If I remember correctly, the author used it ubiquitously in every book of his I read thereafter.

So the next time I hear the word VERY (or read it in a tweet) I plan to make substitution in my mind. I’ve looked up some suggestions in my handy Thesaurus.

An interesting read on the subject of new words can be found at WordCounter.